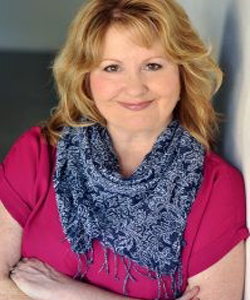 Christine has been an instructor of private voice and a performance coach for 30 years, teaching in New York City, New Jersey, Philadelphia and currently, Texas Wesleyan University where she is an adjunct professor of Theatre Voice. She also has a Vocal Studio at her home in Arlington, TX, where she has been teaching and coaching for 17 years. She is a member of The National Teachers of Singing and was a NATS competition finalist. She was also a chosen participant of Young Artists of The Metropolitan Opera.

Christine received her Actors Equity card at the age of 21 at Brunswick Music Theatre in Maine where she went on for a sick actor playing Eva Peron in Evita. She went on to star in the national tour!

Christine has performed extensively in musicals across the country and operas in Germany. Locally, she has performed at Casa Manana, Lyric Stage, Theatre 3, Runway and Theatre Arlington.

Many of her former students are on Broadway and singing in top cabarets clubs. One is a Grammy winner – Kirsten Maldanado of Pentatonix!

As Director, she has staged many musicals and plays in schools and community theatres. She holds a Bachelors of Music in Musical Theatre from Shenandoah College & Conservatory of Music, now Shenandoah University in Winchester, VA. She aslo hold Professional Diploma from The Hart School of Music, University of Hartford, CT.